How I Reduced Repeating My Mistakes

We all do mistakes and they are unavoidable. From small mistakes such as interrupting someone while speaking (the motivation for this technique) to larger and more disastrous ones. While first-time mistakes are forgiven, repeating the same ones is seen as a characteristic of ours (and is indeed a bad habit). And I wanted to address them after reading the book Seven Habits Of Highly Effective People.

Without further ado, I’ll share the simple technique to reduce repeating mistakes. I’ll be sharing more on how to increase its effectiveness and the benefits I’ve observed in later sections. So, if you just want to know the technique, reading only the first section will be apt. I’ve used the technique for around a year now and, now that I’m sure it has worked wonders for me, I wanted to share it with everyone.

I have a Trello List titled “Learnings / Mistakes” on my Personal Leadership board. One can use a personal diary, a note-taking application, or anything that is [very] easily accessible. Accessibility is key since we want to be able to view the list with minimal effort. For me, I have the browser’s homepage set as my Trello Board. So, it is always the first thing I have to put my eyes on as I open the browser.

Once we have the medium setup, we can move to the next step. Whenever I realize I’ve done a mistake - could be self-realization or someone informing me - I note it as a new entry in the list as “what I should have done instead”. If the mistake is contextual, I add a small nudge to remind ourselves of the situation as well. 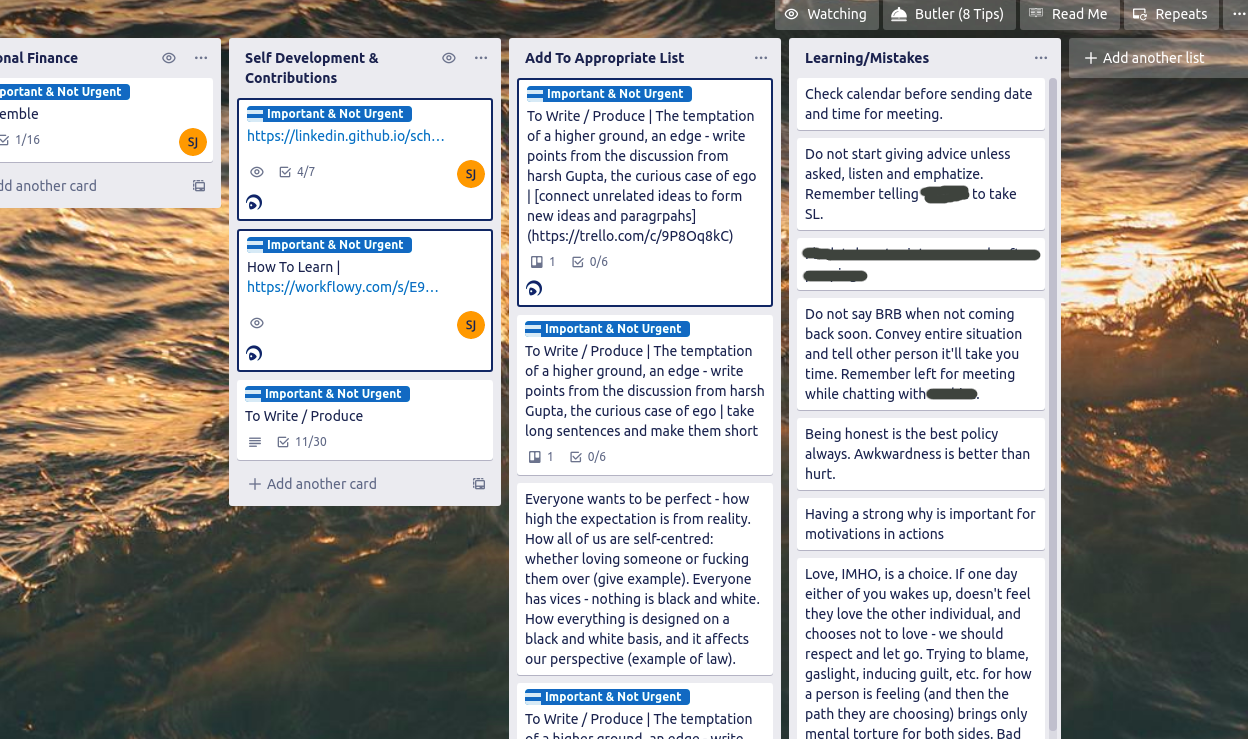 the current state of my learning/mistakes list on Trello

I’ve added a few examples in the following subsections to put forward exact texts that I write, though that is not the most important part. The important part is now reading the list every day (at any comfortable time) and taking note of the new habit we want to develop.

If I feel that simply noting will not help me in a particular habit, I visualize myself in the context I had noted. Thereafter, I go on to imagine myself, as vividly as possible, acting in accordance with the habit I want to develop and not doing the mistake.

Depending on if I’m able to observe the change or not, I keep an item anywhere from a week to a month in the list. That’s it. Thereafter it’s all consistency and persistence. As the learnings compound, we start to see the newly built habits. The following sub-sections describe two of my mistakes from the actual list and how I have made their entries in the list.

I have had a habit of using BRB casually in chat. BRB stands for Be Right Back. In spite of knowing its meaning, I used to use it casually whenever I was getting away from a chat. The catch here is that after saying BRB I should get back quickly. However, I used it for everything - even when I was going to a separate meeting and had no idea when I’ll be back.

A few days back, I was chatting with a friend and left for attending another meeting saying “BRB”. I returned after an hour or so to realize the I had unintentionally kept the individual waiting. Once she made me realize my mistake, I apologized and noted the following.

the cue for improving on the BRB mistake

I consider this an important mistake to correct. So, every day going through the list I visualize myself chatting, leaving for a meeting in between, and writing in full “I have got a meeting so I’ll be back in an hour or so”.

After a few days of reminding myself of the mistake, I’ve started to convey the full situation if I’m getting away and not use BRB casually.

I’ve started cooking some simple dishes myself nowadays. So, I’m not used to the kitchen etiquettes of my home. I always end up keeping the gaslighter on the adjacent shelf where we have the basin. And it ends up getting wet and stops working until we dry it. A major pain for others.

Since this was trivial to me, I didn’t think of making a note initially. Then I realized that I was doing it again and again even after my father told me multiple times to not do it. So, I made the following note.

Hang the gas lighter back on the rack after use.

And within a few days of reading the list, I don’t even have to think consciously about hanging it back.

There are a few abilities, if present beforehand or learnt, will help follow the technique.

After using the technique for a little less than a year, I’ve observed the following changes in myself.

This technique hasn’t stopped me from repeating mistakes altogether. And I still do a lot of mistakes. However, it has reduced the repetition by a large margin that now it’s very noticeable. Initially, it may feel like a gimmick, I felt that way at least. So, it requires a great deal of consistency and persistence to fully utilize.